"Exploring New Caledonia", our latest video is on line!

I am happy and excited to share with you the beautiful adventure of exploring New Caledonia Big Island, Lifou, Isle of Pines and Tenia together with my friend Lena Erdil.

" With the Windsurfing World Cup scheduled for the end of November in Noumea, María Andrés and Lena Erdil decided to head to New Caledonia early and explore this beautiful country whilst preparing for the last world cup event of the year.

Located in the middle of the Pacific Ocean, it is obviously a very exotic destination. But what is amazing is not only the colors, the vegetation, the clear waters or the waves. The atmosphere in New Caledonia is unique for many other reasons, with this short clip we hope to share some of the amazing New Cal vibes with all of you!!"

All happiness and a lot of gratitude to all our local friends supporting us during this trip, making us feel so at home in such a paradise. Also THANKS to our sponsors, to believe in us and give us the tools to follow our dreams and to Emilio for the Edition.

Over the last 4 years I have had a partner with me all the time. I’ve been focusing on been honest to my heart and follow and live my dreams. And Satorisan has been by my side all the time.

2015 started to me not the best way and it looked like a hard and challenging year, as my closest friends know. But things and life keep going and we can keep fighting for our dreams. That is what keep us happy and alive!
During 2015 Satorisan have s...upported me once again, and they supported me also to compete and, for the first time, to do the entire PWA slalom tour. Doing the entire world tour means a lot to me, as training and not completing the calendar is not so cool, let’s say, haha. And this year it was a great adventure, I’ve learnt a lot and it worked as the biggest motivation ever to keep pushing for the 2016 season!
But competing is not only racing, it is also about traveling, and as always, the experiences you live on the way are a very important part, and to me, where the real learning is.

During 2015 I’ve met amazing people, unbelievable beautiful places, shared stories with the tribes in a little Island of New Caledonia, travel around Japan, Azores, Korea, France, Turkey… Traveling you learn about friendship, and also about yourself.

I am proud to be their Satoriheart and Ambassador all around the world. 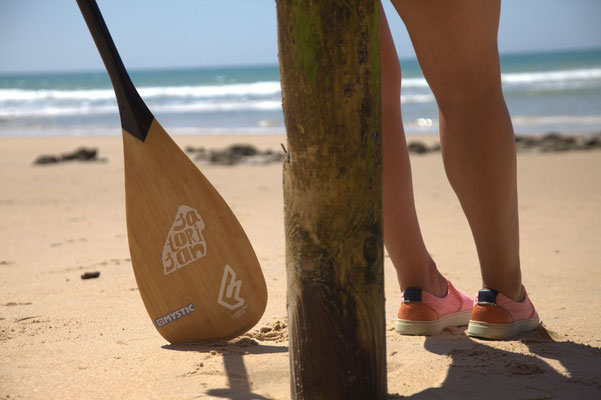 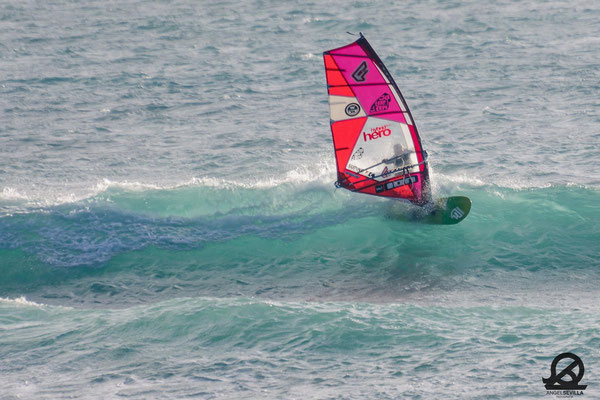 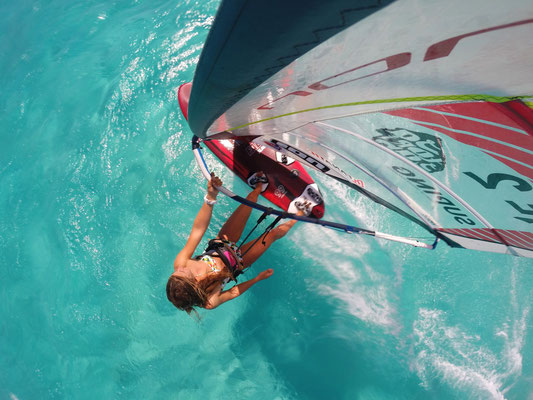 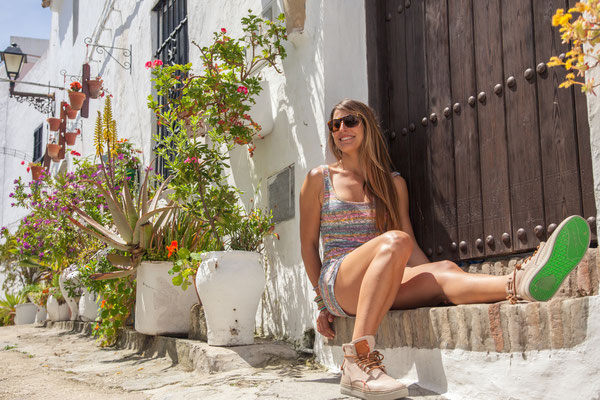 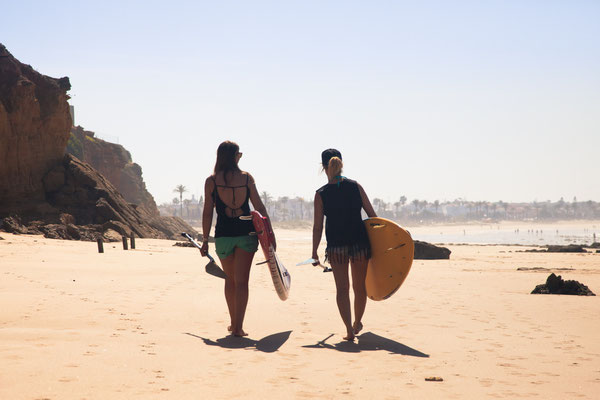 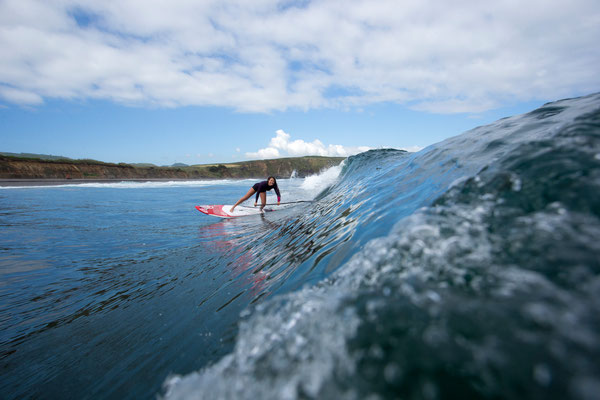 "Loving my Winter", my new video!

This is a small sample and a way to express how happy I am living by the ocean. It is an infinite happiness... I feel very fortunate.
The title came to me almost without thinking, because this winter was simply unforgettable!
I want to thank all those who are supporting me in my way, and especially to Gun Sails, for trusting me during these years.

Even when the wind was not good enough except for 2 days, the organization and the place was absolutely awesome!! In my opinión, the best ever! So the waiting for the wind didn't feel that bad in a place like that... the wind is like this... sometimes comes, sometimes not...

The competition for the girls was 2 finals in light winds. The first one was offshore winds and flat water, really nice. All time planning, exept some pumping at the start. I did a 5th place there, all time trying to pass Marion M. who was in front, but I didn't get her! :D

The second and last final of the women was on onshore wind, choppy and very light, pumping after every jibe. Here I crashed and fell to the water at the 2nd buoy and after that I was in last position, but kept my head focused on passing some girls, because probably that was going to be the last race we were going to do... and I managed to finish 8th! and this fight to pass some girls made me not to lose my overall 5th position!

As this is the first event for the women in the PWA Slalom Tour, I am now ranked 5th! That is motivating nor the upcoming events!

3rd at the IFCA SLALOM WORLDS

It was one of those competitions that i will not forget. Even when we spend so long waiting for the wind, the time spent at the island was great. I couln't be happier about the experience. Now I know there is a place in the middle of the Atlantic Ocean that I really want to explore, that I meet really nice local people that for sure we'll keep in touch, and the competitors I'm sure that we got to know each other a bit more, and we are an awesome slalom fleet!  The girls crew were really a nice group and it is an awesome thing... we compete in the water, but we are very friends out of the water! I love it!

The event was amazing well organized and the racing day was so cool! 7,1-100l full (mega full) power in the gust, and quite flat! the jibes were a bit hard sometimes! haha, but it was perfect to enjoy the speed! We manage to race 3 finals, where I did 2nd, 3rd and 3rd. I felt comfortible on my gear and I am looking forward to sail again in strong wind with the slalom!

This position place me at the 2nd place of the actual IFCA  Slalom Ranking of 2014!

Winning this awards is a great achievement, as this is the only and biggest recognition that we have in Spain for freestyle sports, and I won it at the national windsurfers section, were I was fighting against the best winsurfing men from Spain! And this kind of sports are often a male world... So that was a very good surprise for me to win it!!

Once again, the Gun Sails Photoshoot experience was awesome!!! Have a look to the video to sea the nature and the action we got to have in Maui this winter!

I feel so grateful to be part of it again :)

I had great moments with the team too!

Footage and video from Valentin Böcker

This result is a great achievement for this seasson, and i really thank my sponsors for supporting me with this top equipment, i couldn't be happier with it!

Super fun event in Murcia. So happy to race with all the crew, such a good ambient and nice people making the spanish tour this year! I'm happy that it looks that finally we have a female fleet in Spain and hopefully more girls will be joining us.

The last day we manage to finish 4 rounds in the open fleet and 2 for the girls fleet. Since last year i didn't compete against the guys, and the women fleet is new for me, so i couldn't really know how was i racing untill now. I've finished 8th at the open fleet and first of the women, so i'm quite HAPPY! Being in the finals with the top riders is so much fun and you risk more than ever! Making good starts was very important!

The weekend with friends was really nice and the sailing conditions the last day were just amazing. Absolutely perfect for slalom. Flat and a constant 16-20knts to be sailing powerful with the GS-R 7,9 and the 107. Can't wait for the next event in Badalona!

We were quite excited about freestyle, but unfortunately, the freestyle was canceled due to the low wind conditions, so no freestyle pics this time... at least we have more time to train and improve till the next possible freestyle event in september in Tarifa.

Once more, thanks to Jose Piña for the nice pics and also to everyone that posted more.

5th AT THE IFCA SLALOM WORLDS

1st AT THE RANKING OF SPANISH FUNBOARD TOUR